Poems from the Palace 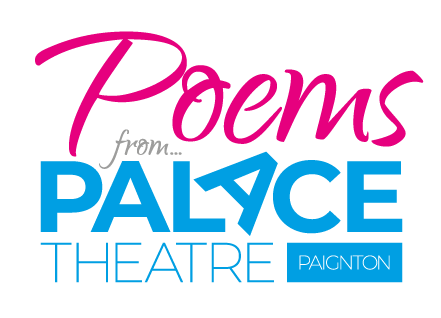 Poems from the Palace is a new community-driven project supported by the National Lottery Players and Arts Council England’s Emergency Response Fund and Literature Works, a literature development charity for South West England.

We are inviting a range of local organisations, businesses, community groups and individuals to compose their own poem or recite their favourite verses from a well-known poem and film it for broadcast on our social media sites.   The project was developed in response to the theatre’s forced closure due to COVID-19, to keep the profile of the theatre has high as possible, to continue to engage with our audiences and local community and promote creativity and poetry. The project is ongoing and so far we have collaborated with Doorstep Arts, Torbay and South West of England Festival, Bays Brewery, Wonder Pantomimes, Torbay Libraries and Libraries Unlimited, Torbay-based poet Robert Garnham, Bijou Theatre Productions, Step in Time, Stairway Coaching, South Devon College Performing Arts students, Macwhirter Western Ltd and many others planned.

We have developed the ‘Poems from the Palace’ project in response to the COVID19 lockdown and to entertain our audiences, engage the community, provide a platform for local businesses to promote themselves and to maintain our social media presence – which is particularly welcomed by those who are isolating and shielding at this difficult time. The short films are posted on the Palace Theatre Paignton social media sites including Twitter, Facebook, Instagram and Youtube with the hashtag: #PoemsfromthePalace.

A poetry workshop and live charity performance event is planned for later in the year or early 2021.