130 Years at the Heart of Paignton Life 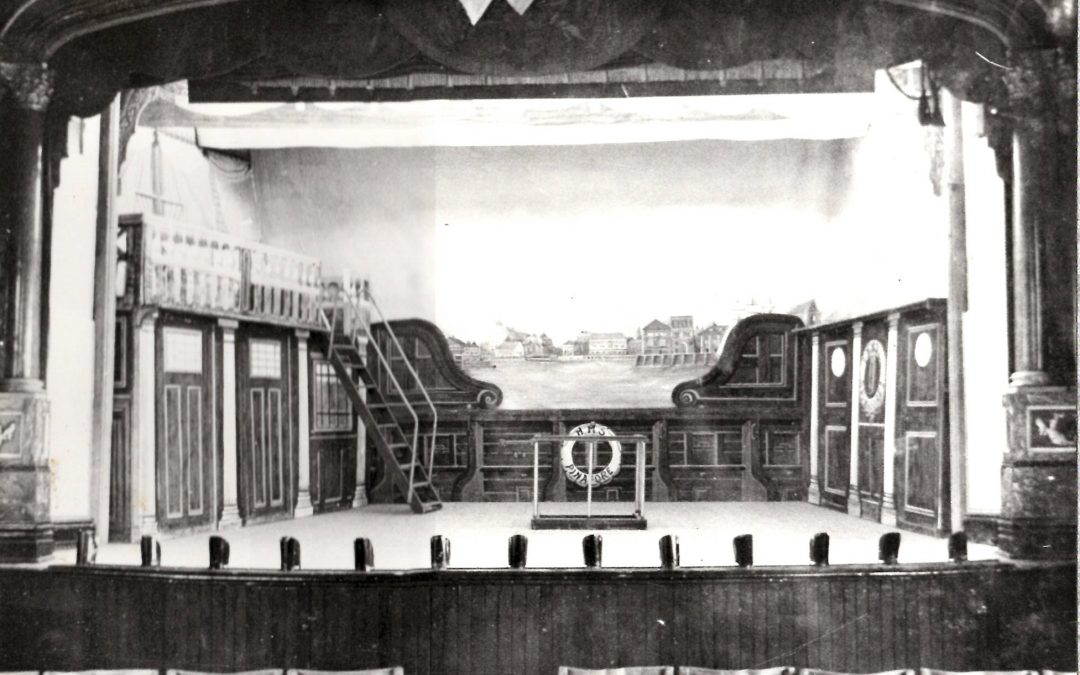 Fixing up, clearing out and sorting is the order of the day for lockdown at the Palace. Join our amble through the theatre archives, as we reveal the stories, stars and sensations from its 130 year life.

The Palace Theatre was opened in 1890 as the Paignton Public Hall following some years of debate over the viability of the project. The town already had the Bijou Theatre/ assembly room in Mr Dendy’s Gerston Hotel but, as tourism began to increase, there was a need to provide bigger and better facilities to attract good touring companies. The plans show that original intended location was in fact in the middle of Palace Avenue Gardens but the final scheme was for a tree-lined park encircled with villas of red sandstone with the imposing Public Hall overlooking the park. What had been ecclesiastical land was transformed from cabbage fields to a vision of a grand business and cultural centre for the town. 3,500 £1-shares were issued with investors including some well-known local names; Palk, Waycott and Rossiter. 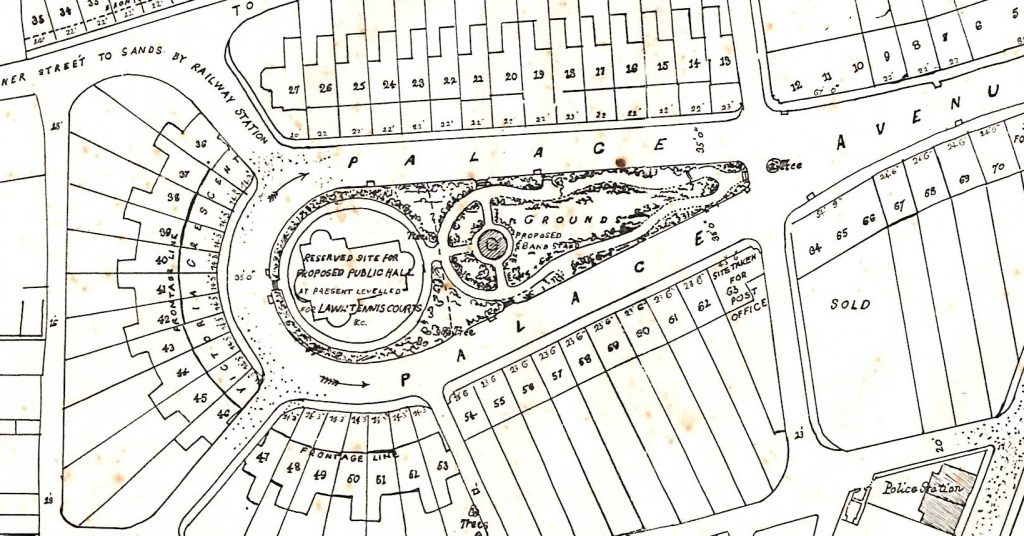 Local printer WA Axworthy, a chairman of the public hall, would send his son Rex across the avenue to light up the gas lamps before a show. The Hall had no box office so bookings were made at Axworthy’s.

Once completed the Hall seated 800 people with a mix of canvas and wooden chairs with plush seating in the balcony. On Friday 12th September 1890 opening night guests were entertained by Paignton’s newly formed musical society and this is where our 130 years history of entertainment begins.

The vision of a  cultural centre for the town came to life with a wide variety of activities: the local Volunteer Army Corps used the basement for training (gun runners can still be seen embedded in the floor) ; the Athenaeum Society ran a series of  ‘Lantern Lectures’; domestic livestock shows were held by the Paignton and District Fanciers Exhibition, with Herbert Whitley of Paignton Zoo’s exotic birds often taking prizes; an Autumn Horticultural Exhibition; the Primrose Ball, a fabulous night out with delicious buffet, floral decorations and live music, all for the princely sum of 3/6d.

In February 1891 Gilbert & Sullivan’s ‘HMS Pinafore’ was performed by one of the first fully fledged amateur operatic societies in the country.  Six years later the Paignton Musical Society joined forces with the Torquay G&S Society for a full production of the Pirates of Penzance, celebrating the opera’s long association with the town. The Hall’s first official Summer Show was ‘Mr Dale’s Bohemian Troup’ in 1895.

After the turn of the century the calendar of attractions and activities included burgeoning suffragette meetings. In 1910 at Mr Poole’s ‘Myriomania’ audiences were entertained by a frock-coated compere leading a tour of world sights with the ‘aid of mechanical, electrical and dioramic machinery’.

The Hall’s fortunes fluctuated over the years but WWI brought about something of a revival with regular tear-jerking concerts in aid of the Red Cross and welcome home concerts as the war ended.

Dr Barnardo’s ‘Musical Boys’ starred talented children from the charity’s orphanages and at the height of the depression a free concert was held for 300 children of the unemployed. Rollerskating, boxing and wrestling all combined to keep the hall very busy and a Badminton Hall was added in 1921.

In 1937 the hall was fitted with loudspeakers so that the towns people could hear a live direct broadcast of the King George V’s Coronation direct from Westminster Abbey – very few households having the luxury of a wireless.

Famous local impresario, Jack Baker, having successfully produced the ‘Paignton Pudding’ variety concert, was persuaded to produce a pantomime and in 1935 his 25 years at the helm of Paignton Pantomime Productions began with ‘Babes in the Wood’. It exceeded all expectations attracting a total audience of over 5,000. Panto continued until 1943 when call-up meant the cast had dwindled and the Hall was needed for the war effort. 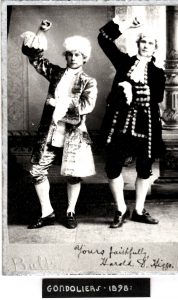 During WWII the Hall was re-named the Garrison Theatre and the United Services Club swung into action providing meals and entertainment for troops. During the massive build up to the D-Day landings thousands of American troops were entertained by hundreds of artists. The theatre was used as a temporary synagogue for Jewish refugees, gas masks were issued from the Badminton Hall, it was a firemen’s dormitory for the nearby fire station and a collection point for nervous evacuees to meet their wartime carers. The Hall and Theatre became the focus of community life and a famous highpoint was Glen Miller performing in a house packed to capacity. Just three weeks later his life was lost over the channel.

Just as the war started, a new series of musical competitions was set up to relieve children’s anguish. Drama and speech were added later and by 1943 the Festival had an astonishing 11,000 entries, one of the largest competitions of its kind in Britain. The Torbay and South West Festival continues to this day, interrupted only by the 2020 virus lock-down!

Post war austerity hit the entertainment industry; stage stockings were so hard to come by that actors’ legs were often painted instead. The local authority was permitted to levy sixpence for ‘artists and recreation’ to raise spirits and these funds helped to purchase state of the art lighting for the theatre, heralding a new era of modern theatre.

In 1955 the local G&S Society were recognised as ‘Record Breakers’ by Roy Castle for the longest singing of G&S Operas with a sing-in that lasted from 5am to 9pm. 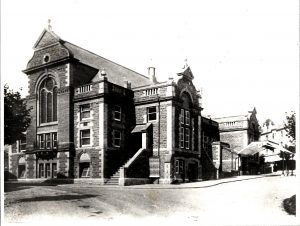 The Palace Theatre showing the canopied carriage stop and the largely-unchanged Southern facade.

Like many an old building, the theatre is rich in stories of ghosts, from mysterious footsteps crossing an empty stage to a lady with a heavy winter coat with a fur collar that refuses leave the auditorium, before simply disappearing. Even this year an unexplained body-shaped cold patch was revealed when the fire service used a thermal camera to search the blacked-out auditorium during an evacuation exercise.

In the 1980s times were tough; the theatre had seen a number of private ventures come and go and the Council stepped in, pursuing various plans to refurbish or indeed demolish what was now known as the Palace Avenue Theatre. Fortunes fared better with the arrival of a very successful production ‘Once in a Lifetime’ starring none other than Lionel Blair whose place at the top of the bill was later filled by Lorraine Chase. In the mid 80s the Theatre had a long-awaited facelift which added the glazed foyer and a bar. Now simply called the Palace Theatre, a further refurbishment in 2006 created the auditorium we know today. In 2018 the Theatre, threatened once more with possible closure, finally left the control of Torbay Council and the newly formed Jazz Hands CIC took over the management. The theatre was once again thriving at the heart of Paignton; audiences have been growing and top name acts have added something special to the busy programme. The current Covid-19 crisis has sadly caused the theatre to go dark – for the very first time in its 130-year history. As they say, ‘the show must go on’ and we hope it does… very soon.

Acknowledgements: This article was prepared with significant reference to the theatre’s own archive, the personal collection of Clive Simmons and ‘The Grand Old Lady of Palace Avenue’ published by local historian, Peggy Parnell.

Afternoon Tea experiences at the Palace, hosted in Stage Left