Dance fever spreading across the land

The stars of Strictly have inspired a dose of dance fever that is spreading through theatres across the land. Of course there are the large arena shows in Strictly Come Dancing Live but it’s fantastic that strictly-fever has created a number of ballroom-inspired offshoots with all the sparkle, style and entertainment we have come to know and love. Here at the Palace we are delighted to be welcoming three of these lively shows in 2020, starting in February with Dance To The Music, a sumptuously beautiful, glamorous dance show created, directed and choreographed by ex-Strictly Come Dancing professional Kristina Rihanoff and hosted by heartthrob Jake Quickenden (X Factor, I’m A Celebrity and Dancing On Ice). Supported by an exciting troupe of dancers featuring South African dance team Marcella Solimeo & Dylon Daniels from Dancing With The Stars, this promises to be an evening not to be missed.

In May it’s the turn of  Ian Waite and Vincent Simone. The Ballroom Boys are bringing their brand new show – Ian Waite and Vincent Simone….ACT TWO, after the roaring success of their 5 star rated 2019 tour! The fabulous Strictly Come Dancing stars promise another wonderful evening of old-fashioned variety – dance, comedy and song! With beautiful costumes, gorgeous lighting and world class routines, including the Viennese Waltz, the Foxtrot, the Rhumba… and of course… there has to be another incredible Argentine Tango routine by the master!

And finally in July, straight from his Directorial and Choreographic debut at Sadler’s Wells, it’s Strictly professional dancer Neil Jones with his brand new live dance show, GINGERLAND. Neil will show you the real reason he’s a three-time World, eight-time British Champion and well-known choreographer in the world of Ballroom dancing.
Neil will take you on a journey showcasing what made him unique within the dancing world and introduce you to the very people who influenced him as a dancer. It just so happens that they were all Ginger! 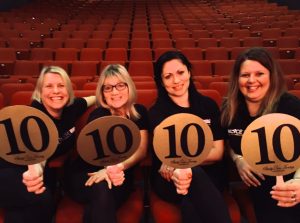 Dance to the Music – Sunday 16 February

Afternoon Tea experiences at the Palace, hosted in Stage Left